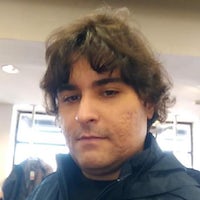 The end result is demonstrated below. 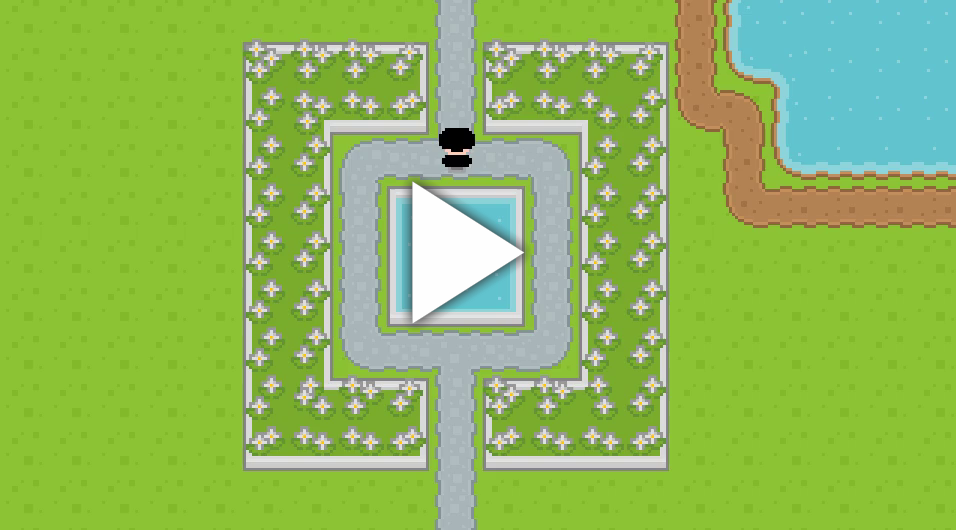 I will talk about how you implement a camera in a top-down RPG game in Godot. Before going through, however, you need to check that you satisfy some requirements and environments listed below:

Also, this method has drawbacks as well as benefits, which is to be discussed at the end of this article.

It's actually a bit hard to setup the camera for Godot and it really depends on your needs. My first goal was to implement a camera that will collide with boundaries but that complicated things a lot. Then something clicked. Basically, my game could be divided by section, which utilizes the resolution of the game as constant. To visualize what I'm saying, see the image below: 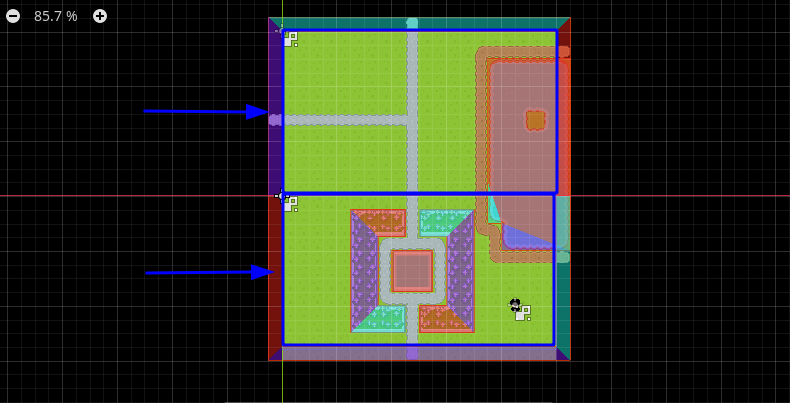 In this image, I split my world into two sections, which are marked with blue rectangle (and pointed at with blue arrows if you cannot see it). These sections are only as large as the resolution of the game. So the logic is simple, when the player collides with one section, switch the camera to that section.

The main tip for Godot is to save everything as scene for reusability purposes. Some scenes are not meant to be launched directly. I call these scenes components. These are meant to be injected into a scene and used.

In this case, I need two exact components: 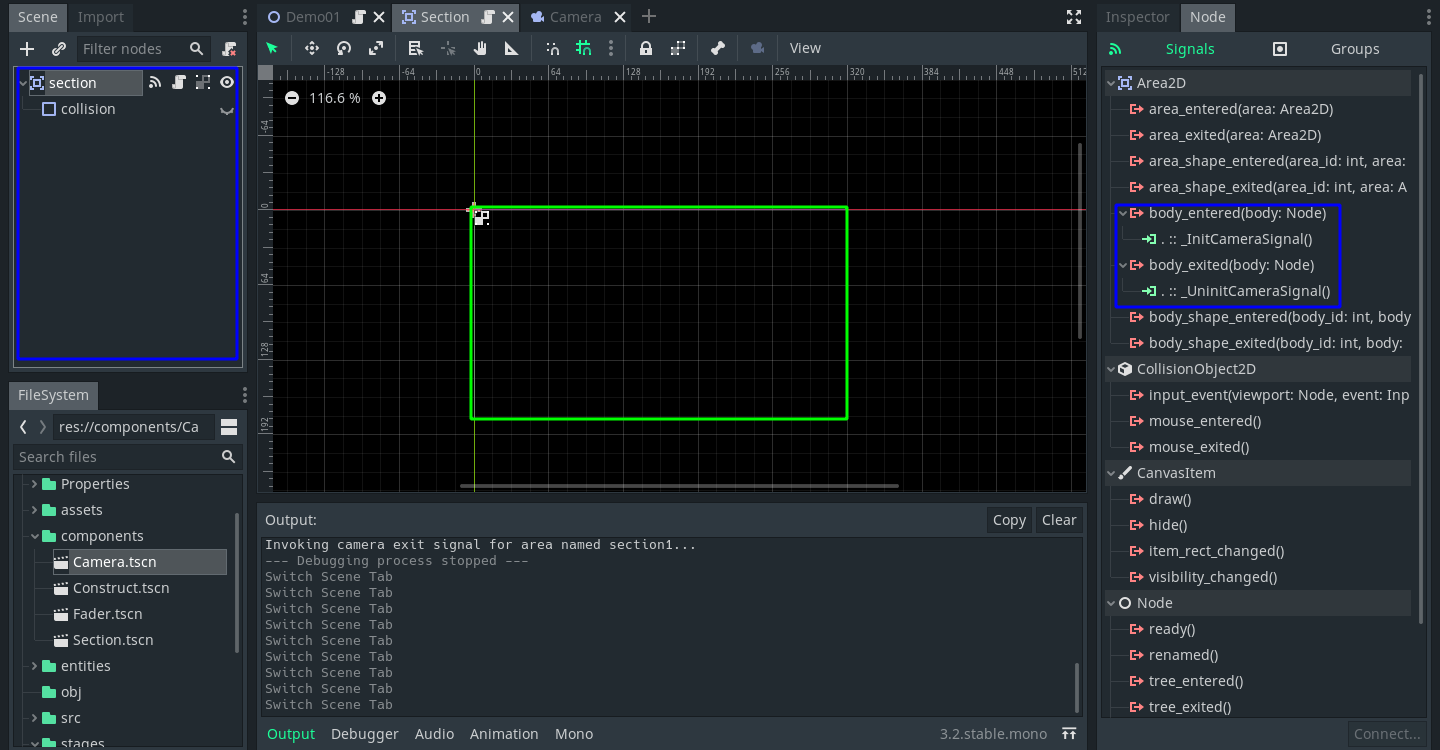 This is how Section component looks like. The scene tree is formed as below:

Notice how collision node's visible property is set to false by default. That's because it would cover entire game world with a blue mask while we develop the game and make it quite harder to see and manipulate the world. Also, collision's boundaries are set exactly to the game resolution as it's seen by the green rectangle above.

section emits two signals on itself:

On the other hand, Camera component is actually a very simple scene, containing only a Camera2D node named camera as root. See below: 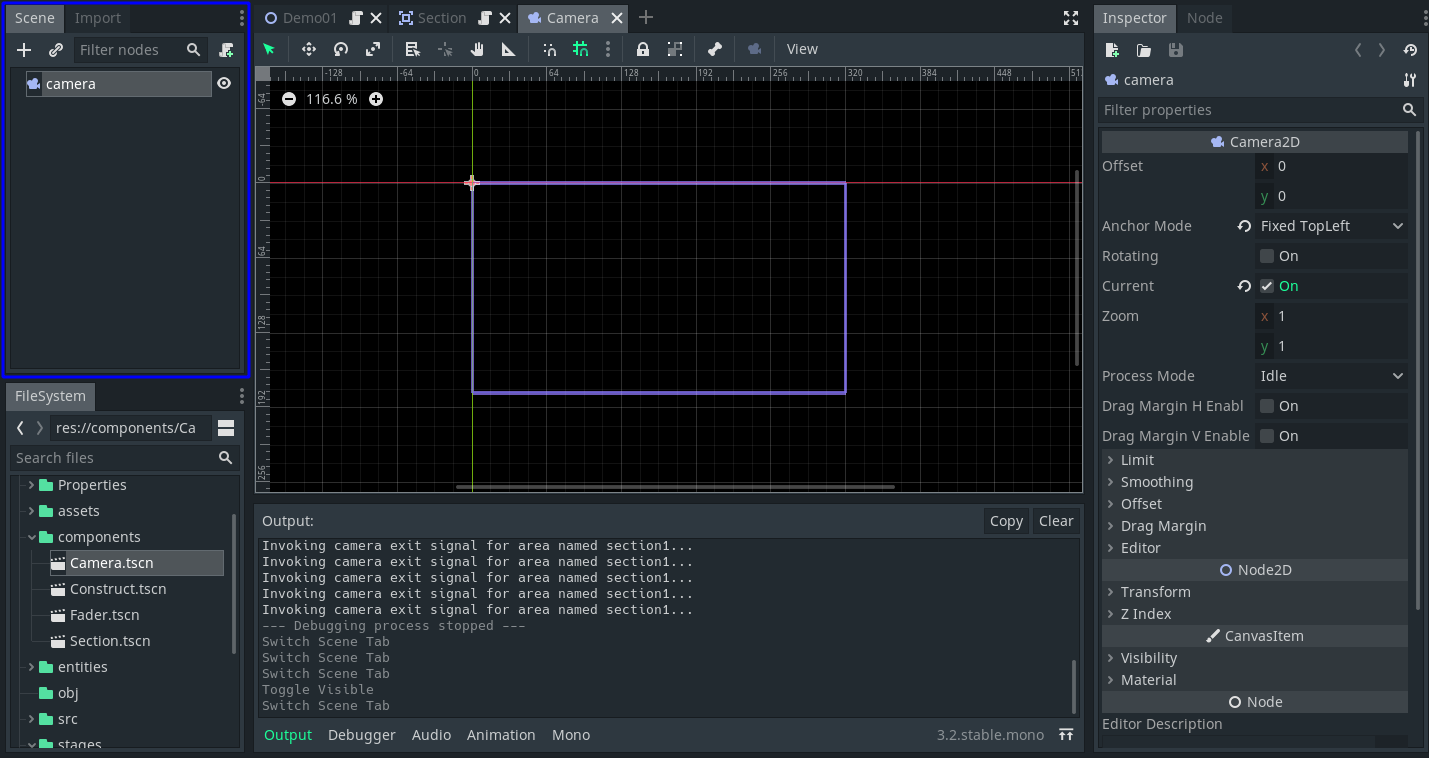 The things you need to be sure is to set Anchor Mode to "Fixed TopLeft" so that the camera's origin should be at top-left, which makes it easy to place on game world, and Current to "On" to immediately focus on that camera when the game loads.

Section component will deal with setting the camera when player collides. Let's start from scratch.

Whenever a scene loads a section, it will call _Ready method, let's see how that goes.

When Section is ready, it will load Camera scene once so that it will never do that again. Loading a resource, especially in software types like games where you need to compute and render every pixel on the screen based on user input and do that probably 60 times per second, can be quite resource-draining. That's why we need to load it once and reuse it when in need. Now it's time to write body_entered emitter, _InitCameraSignal method:

Checking for the name of body is vital here because we'd like to filter the others out. The thing to be careful here is that our player must be named player in the tree so that this method can actually work.

And let it run only when the camera is null. Setting the camera null will make more sense with _UnintCameraSignal method below:

Here we also set the camera to null because we would not like to have more than one camera at a time in our scene. Setting it to null will also result the camera to be freed from the memory after some time.

The final code can be viewed below:

Adding Sections in the World

Now the only thing left is to add Section components to our game world.

We will repeat this many times until we cover all the game world. After adjusting the position of the sections, it will look like below:

This provides a camera that is locked in a particular section. This way, you will not need to deal with the boundaries of the world and how the camera will interact with that. That caused me a lot of headache, so instead of doing that, I thought this method is simpler and more useful in terms of reusability.

This method, however, also brings some considerations and drawbacks as well. One that comes to mind is that we constantly initialize a Camera2D and remove reference (setting it null) as we switch sections, which might be okay for small to middle sized worlds but as the world gets bigger, initializing constantly will bring a resource cost to the table. Also, in big worlds, cameras that are nullified, that have lost reference, will be cleaned after some time by the garbage collector, which will lead to some peaks as GC starts working that will result in frame skips as the player moves on.

This method also does not consider how the entities on unseen sections will react. So, if your game has enemies that has player detection, they might follow player from out of camera. I wanted to keep this as simple as possible, so I did not want to also cover that. Possibly the simples solution for your most basic demo game would be to design the game world with that's in mind. For instance, keeping enemies far from where the player will enter the Section and keep player detection radius as narrow as possible.